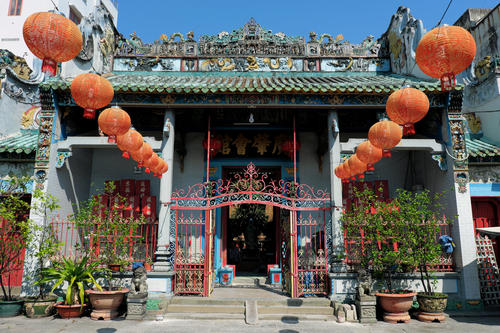 I’m lying in bed. It’s dark. The time is 04h00 and I’m wide awake. This isn’t a mistake. I wake at this time every day. A few minutes later I’m standing on my apartment balcony with a mug of hot coffee in my hands and I’m staring at the Eastern sky. I can see stars. Great! Well, to be honest I can’t see that many as I live in the center of the largest city in South East Asia, but even a few stars means that there will probably be little if any cloud cover when the sun rises shortly after six. Perfect shooting conditions for what I have in mind. I love this time of day. It’s cool and quiet and the unborn hours ahead are pregnant with possibilities. Maybe today I’ll get a shot I want – a keeper.

Getting that keeper is what gets me up every morning. I’m not sure if it’s easier or more difficult for me to get that keeper, than it is for other photographers. Well, obviously there are others who are much better at this than I am, but that’s not what I mean. You see, by and large, I’m photographing things that I’ve photographed before. My goal is to improve on my previous work and to create a new portfolio, a complete body of work that reflects the best of Vietnam and the best that I’m capable of. I’ve had many years to think about almost each and every single shot I want, to dissect and analyze and consider every element. The question is, can I live up to my own standards? There’s only one way to find out.

My destination today is a visual goldmine called Hoi Quan Quang Trieu. It’s an old Chinese community hall, built by immigrants from Guangzhou and Zhaoqing in Guangdong province, who migrated south around 150 years ago. The entrance courtyard faces east to welcome the rising sun and illuminate a statue of the goddess of mercy. Beyond this is an open area leading to the first altar. Here there are three large brass urns where incense sticks are offered as prayers. Behind this is the main hall and finally the high alter with a statue of Quang Trieu. With dark walls, red and gold lacquered woodwork and light from above streaming through clouds of fragrant smoke from coils of incense hanging from rafters, the opportunities for photography abound. But I’m only going for one shot. I want details from the roof of the first courtyard.

Coffee finished. I get dressed and check everything. This morning I’ll be taking a single X-T3 body, a 16-55 f/2.8 and more importantly the 50-140 f/2.8. This is the longest lens I have and it’s the one I’ll need to reach the details I’m after this morning. I consider taking a 14mm prime, but decide not to. All that was left was to throw a few fully charged batteries into my bag and grab a tripod. Fortunately, it only takes fifteen minutes or so through the almost empty streets to get to the temple. What makes this particular temple suitable for a low light shot is that it faces a new highway and a large canal. That might not sound very atmospheric, and it isn’t. It does, however, provide a distinct advantage as there are no tall buildings around to block out the beautiful morning light… and the light today is lovely!

The old caretaker, who lives on site, swings open the heavy wooden doors and makes his way across the entrance yard with his worn sandals slapping the cobblestones. He unlocks the gate and we exchange a short greeting. They know me well here. I used to live just around the corner. Oh well, out with the tripod. I’m using a ball head today as I don’t plan any panoramic shots. Mount the camera with the wide lens and a quick swipe on the touchscreen lets me set my horizon level. I start to compose my first shot, a symmetrical frontal view of the building to be used for context, and I can’t quite fit everything in. Damn. Should have brought the 14mm. Normally I’d just recompose, using my feet, and take a few steps backwards. Not possible here. I’d be standing in the middle of a road with what is now quite a bit of fast-moving traffic. Oh well. A good excuse to come again.

I take one shot. The building has a large overhang which hides a lot of beautiful detail above the entrance in shadow. Not much I can do about that. Maybe lift the shadows a little in post-production. Now it’s time to really get to work. I put the tele-zoom onto the body and start shooting the intricate little figures built into the roofing. Collectively they tell the story of the founding of the community hall, and tradition says that they represent real individuals. That’s easy to believe, as they seem to come to life through my viewfinder. I had worried that the 50-140 might not have had quite enough reach, but the images on my screen look much better that I could have hoped for. The low light casts strong shadows and each little statue stands out creating almost a three-dimensional effect. I’ve been shooting now for almost an hour. I can’t see anything that I’ve missed. Time to go inside.

I wander slowly through the halls, but there’s nothing much worth photographing right now. It’s too early. The temple interior has no windows. The only time light enters the inner sanctuary is around midday when it streams through hole in the roof. The effect then is amazing. It cuts through the thick clouds of incense smoke and reflects off the gold leaf script and creates an almost mystical glow. That’s still four hours into the future, however, and I hope that I’ve gotten what I came for today. I say goodbye to some of the staff and make my way home. Time to see what everything looks like full-size on my monitor. To tell the truth, I’m more often than not disappointed when I review my photographs, but I don't think that will be the case today. The only important question is, however, do I have a keeper? Kugara zvakanaka!